Defense Verdict in a Case of Dialysis Fistula Infection and Endocarditis

Defense Verdict in a Case of Dialysis Fistula Infection and Endocarditis 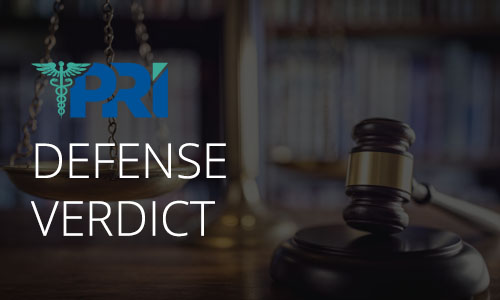 Our Claims and Legal team secured a defense verdict in Bronx County Supreme Court on behalf of a nephrologist, and a nephrology professional corporation in a case involving a 47-year old married male with end stage renal failure on hemodialysis. The plaintiff alleged that our defendant failed to properly attend to an infected hemodialysis access site, did not send the patient to the emergency department and, as a result, the patient missed an opportunity to have his infection properly treated, leading to endocarditis, cardiac failure, and death.

The allegation period began on October 8th, when the patient presented for hemodialysis. At that visit, the patient had complaints of fever and chills. The dialysis nurse noted: “signs of infection: patient had a blister on inner side of his fistula which broke yesterday, and pus came out”.  The patient was seen by the nephrologist, blood cultures were drawn, and vancomycin and gentamicin were administered.  Two days later, the patient returned for hemodialysis and was late for his appointment. The fistula site was noted to be without signs of infection. Vancomycin and gentamicin were again administered. The dialysis nurse completed dialysis and noted that it proceeded uneventfully. Two days later, the patient was admitted to the hospital with infection and renal failure.  The patient arrested in the emergency department and was resuscitated but expired in the intensive care unit.

At trial, plaintiff’s counsel argued that the patient should have been sent to the hospital on October 8th. Additionally, the plaintiff’s lawyer tried to show that the results of the blood cultures had grown out methicillin sensitive s. aureus; however, the defendant nephrologist who had sent the culture was never aware of this finding. According to plaintiff’s legal theory, had the defendant been aware of the culture results, appropriate steps could have been taken at the subsequent dialysis visit on October 10th. Finally, plaintiff’s legal team claimed that the dosing and timing of the antibiotic administration with the hemodialysis was a departure from standard of care leading to inadequate antibiotic serum concentrations. In response, our defense team was able to show that the patient was non-compliant with his dialysis, frequently missing dialysis appointments and not taking proper care of his fistula site; both of which made him more susceptible to infection. On the visit of October 8th, our defendant attempted to send the patient to the hospital; but the patient refused transfer. As for the blood culture results, the non-party defendant laboratory had already settled on the case when it was shown that they had violated their own written protocols in not contacting the ordering physician after the specimen cultures were positive. Finally, our infectious disease and nephrology experts were able to demonstrate to the jury that antibiotics were appropriately dosed and administered to the patient; and that by the time the patient presented on October 8th, endocarditis with abscess formation was already established requiring surgical treatment, but that unfortunately, the patient was not a surgical candidate. After reviewing all the testimony and evidence presented, the jury returned a verdict in favor of our defendants.